To encourage imagination and the fun of reading children and teachers came to school dressed as their favourite book characters. The children were greeted in the morning by Snow White and the Seven Dwarfs, otherwise known as Michal, the Premises Manager, the Senior Leadership and Administrative Team!! 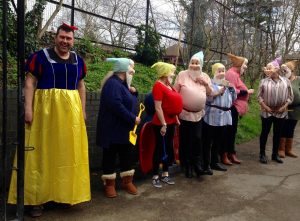 The children had an opportunity to parade their costumes in a whole-school assembly. It was truly amazing to see such a display of the children’s creativity with many of the costumes home-made.

We had characters from such celebrated books as J.K. Rowling’s Harry Potter series, Roald Dahl’s ‘Fantastic Mr Fox’ and ‘Matilda’. We had Cruella de Vil from ‘‘The Hundred and One Dalmatians’ not to mention many Gangsta Grannies and Grandpas from David Williams’ popular books. The children also showed their creativity in the choice of book characters. One child in Year 3 had transformed herself into the Mad Hatter’s tea party table from ‘Alice’s Adventures in Wonderland’ by Lewis Carroll and another had come as a very convincing bookworm! Puck from Shakespeare’s ‘A Midsummer Night’s Dream’ also turned up. 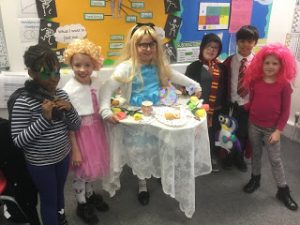 Each class had the daunting task of selecting the best costumes which were awarded ‘Willy Wonka Golden Ticket’ style book vouchers. All the winners were invited to our Scholastic Book Fair and with great excitement they all exchanged their Golden Tickets for a book of their choice. 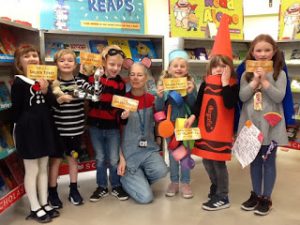 The children were also encouraged to participate in the World Book Day campaign of ‘Share a Story’ and they spent much of the day sharing stories with each other in class, in the library and in the playground; with older children reading to the younger ones.

Our week long Book Fair helped us celebrate World Book Day and gave the children an opportunity to get a book using their £1 World Book Day token.  We also got an amazing write-up in the Islington Tribune, which you can read here! 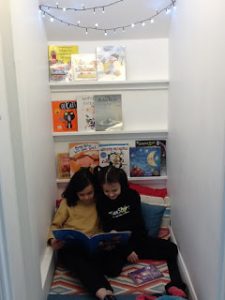 Angela Noronha, Head of School, said “World Book Day is a great opportunity to raise the profile of reading across the whole school community and helps children to engage with books in exciting ways”.