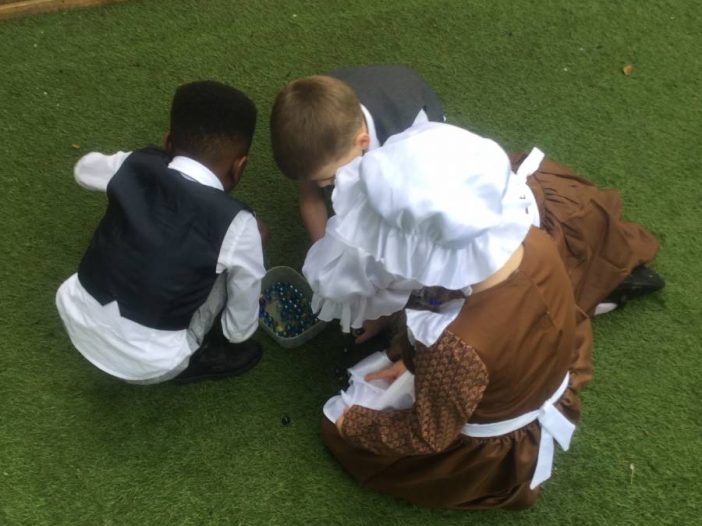 Year one went back in time. The children arrived at school promptly for their Victorian school experience. The children were wearing their finest Victorian clothes (even if some were covered in soot from their morning duties and jobs). Luckily, they were given some recreational time to enjoy traditional Victorian games like hopscotch, marbles and skipping before the school bell was rung. The children lined up in their two lines and prepared for their cleanliness inspection. Mam and Sir were not impressed with the marks on the children’s hands, faces and shoes! The children began with their assembly in which they recited facts about the British Empire, the Queen, said our daily prayers and sang traditional hymns. It was then time for instruction on the three Rs: Reading wRiting and aRithmetic. The children used their slates and chalk to form cursive writing, recited the Victorian proverbs and then even practised their twelve times table – all vital skills in the Victorian times. Some children did not live up to expectations and were even punished with the back straightener and dunce’s hat! After lunch, the children were spilt into two groups for drill. The boys then went with Sir for technical drawing instruction while the girls had their housework and cookery lesson. What a great day we had! It is safe to say we were glad to go back to 2018 the next day!

Do NOT follow this link or you will be banned from the site!